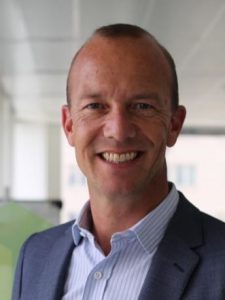 Geldrop, October 10, 2017 – As of October 10, Rob Peters has been appointed as CEO of Coram International BV. His appointment is a clear reflection of Coram’s ambition: ready to play a meaningful role in the sanitary industry in Western Europe with a clear strategy in which entrepreneurship, market and product development will be taken to the next level.

Rob made a career at Unilever, where he was the founder of the success of Lipton Ice Tea in the Netherlands. He lived and worked in South America, returned to Unilever headquarters and then became responsible for Unilever’s Foodservice branch in the Netherlands. In 2010 he exchanged Unilever for carpet manufacturer Desso, where he was, among other things, Retail Director and later Marketing Director. In 2015, after Desso was taken over by the French Tarkett, one of the world’s leading flooring producers, he was appointed Vice President of Marketing and Business Development, and worked from Paris. With the appointment of Rob Peters as CEO, Coram aims to add broader knowledge and experience, creativity and new thinking to the group, which focuses on profitable growth of the company in the coming years.

Coram International B.V. is the parent company of a number of well-known international brands in bathroom furniture and accessories such as Geesa, Sealskin and Tiger. In the United Kingdom, Poland and Norway, the Coram group also has brands such as Coram Showers, Impey, Antado and Esbada in its portfolio. Coram International is also active in the injection molding industry with its subsidiary DPI.

Coram Sanitair strives to be a significant player in the sanitary industry in Western Europe. Brands from Coram, such as Geesa, Tiger, Sealskin, Esbada and Impey play an important, distinctive role in positioning within the professional retail trade, DIY (DIY) and E-commerce channels. An important objective here is a coherence of the development of accessories and integrated total solutions. The distinctive character of the products and solutions is emphatically created by design and innovation. All are brands with a rich history, some up to more than 250 years.

The DPI business unit, once established as a supplier for Tiger Plastics, is now a manufacturer of plastics based in Geldrop and Helmond. With DPI, the group has a large (development) capacity and expertise in the field of injection molding and assembly. These two success factors make DPI “more than plastics”. The aim of DPI is to profile itself even more as a full-service partner, including logistics functions.